Not all Muensters go to heaven

I really like washed rind cheeses. So for our first podcast, Jeff Cowan and I followed a recipe for Muenster cheese which had us include b.linens along with the starter culture. A week later, I learned while taking the class at OSU (see previous post) that b.linens need oxygen to thrive and it is better to be applied to the outside of the cheese along with a 10% salt solution during the washing phase (I also learned that washed rind cheeses are one of the harder cheeses to get right). So when I returned from the class I drenched my Meunster cheeses with a 10% brine innoculated with b.linens. I left the surface dripping wet, which I fear may have been one of my many mistakes. 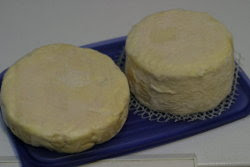 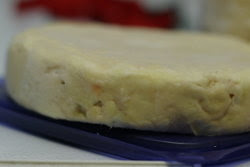 After 4 weeks I had a surface that was very slimy, with a strong Limburger smell.

There was no characteristic orange growth except for one spot on the smaller of the two cheeses.

I posted in cheeseforum.org a request for advice and a little feedback, the best of which came from user francois who stated that I did not have b.linens growing, but instead a strong yeast infection. According to him, the smell I thought was coming from b.linen growth was coming from protein breakdown due to the yeast.

I tried scraping off the layer of slime and re-washing with a brine solution.

I went on vacation for a week, and when I returned I found a very smelly, slimy mess of a cheese. The smaller cheese had grown some blue mold and the larger was slimy again. Slicing into the larger cheese revealed a firmer paste and more horrible smell. I braced myself and tasted it. Extremely strong and unpleasant ammonia flavors forced me put my open mouth under the kitchen faucet to try to rinse foul substance out of my mouth. This was a home cheesemaking attempt gone horribly wrong. 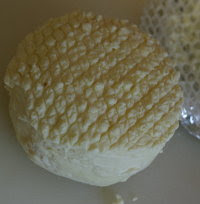 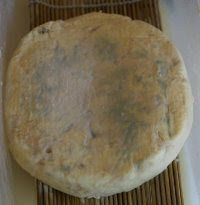 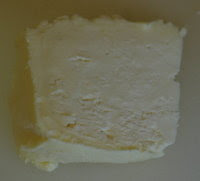 I will attempt this again in a couple of months, and try to avoid the pitfalls I encountered this time around. 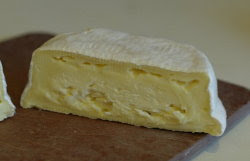 On the encouraging side, the Camemberts I brought home from the OSU class (rescued from going to waste) have turned out fantastic. They seem to need a bit more salt for my taste, but they are runny and have the right flavor. Now I need to give a lot of them away, as they probably only have a couple of weeks of perfect ripeness in them.

Anyone need some cheese?
Posted by sputicus at 9:21 AM No comments: