In the February edition of Sunset Magazine I was delighted to see an article on making your own cheese at home. They obtained recipes from two established artisan cheesemakers and presented Cowgirl Creamery's Fromage Blanc and Bellwether Farms' Ricotta.

I was extremely excited to see a mainstream magazine touch on the home cheesemaking phenomenon. I was even more excited that they were hosting a contest for readers to create recipes using these cheeses, with a prize of tickets to California's Artisan Cheese Festival. I have discovered that I love to create recipes from scratch, it really gets the mad scientist in me going. 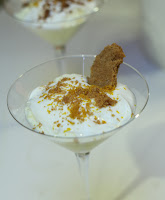 I entered a cheese desert, in the shape of a cocktail, turning the Cowgirl Creamery's Fromage Blanc into a "Sweet Cowgirl Cheesecake Cocktail."

You can download my Cheese Cocktail recipe here. If you make it let me know what you think. I thought it was a pretty good use of Fromage Blanc, which was one of the easiest cheeses I have attempted.

I also tried to make a savory dish with the ricotta by baking it whole. Sadly it unexpectedly burned in the oven. I will have to work a bit longer on getting that one right.
Posted by sputicus at 3:35 PM No comments: