Yogurt falls into the category of "dairy product," a category that also includes cheese, butter, crème fraiche, and kefir, among other things. While it is not cheese, it fits nicely into the discussion of home cheesemaking because making yogurt is identical to culturing cheese, and you get to skip all of those complicated (but fun!) chores like cutting curds, pressing, and aging.

Yogurt is simply milk which has been fermented by a cocktail of lactic bacteria. Yogurt cultures prefer temperatures near 115°F, much warmer than mesophilic cultures which prefer the 85-90°F range. There is some overlap in bacterial species between thermophilic cheese cultures and yogurt culture, and in a pinch you can use yogurt in place of thermophilic culture to make cheese, though the results will not be identical. Technical facts aside, what this simply means is that if you heat milk to 115°F, add some commercial yogurt with active cultures, and maintain the temperature for 12-16 hours you can turn 8 oz of yogurt into 2 quarts overnight.

In Alton Brown's Good Eats episode "Good Milk Gone Bad," Alton describes his mad scientist method of making yogurt which involves a clear container, a heating pad, and a trash can (he demonstrates this and other gadgets on a spot on David Letterman). 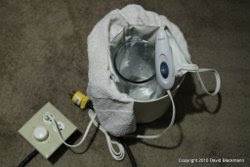 Being the devoted AB fan that I am, I constructed my own incubator using a flower vase, a heating pad, a towel, a digital thermometer and a light dimmer. It makes fantastic yogurt, but I have to admit it is not something I would recommend to someone who doesn't like tinkering with things like I do. 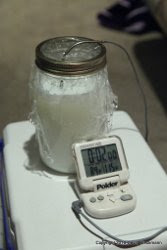 It occurred to me recently that rather than leading a prospective yogurt maker down the mad scientist path described above, you could keep milk warm overnight using the same method I have been using to culture cheese starter: Keeping a jar of inoculated milk in a picnic cooler filled with warm water. Basically you just warm the milk up to about 5°F higher than your target temperature and place in a picnic cooler with water of the same temperature. Over the course of incubation the temperature will drop slowly (the cooler does a pretty good job at maintaining heat), and for the majority of the time it will be in the right range.

So here is my recommended method for making yogurt at home, using easy to find items and no mad scientist contraptions. This method uses the microwave to heat the milk, which is my favorite method since it is easy to control and does not dirty a saucepan, but you can also heat the milk carefully on the stove if you like. If you can use more yogurt, mix up two jars instead of just one.

All equipment should be clean before starting.

Place cooler in a location where it will not be disturbed and insert the jar. Close the lid and let the yogurt incubate for 12 to 16 hours, until it is thick. Transfer the yogurt to the refrigerator and use within 2 to 3 weeks.
Posted by sputicus at 10:46 AM No comments: