Rennet from a Thistle? 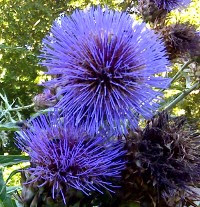 I met Jon Clark at a recent cheese class where he was a student. Jon is currently teaching English in Hungary. Though he is really interested in making cheese, he does not have the luxury of being able to order ingredients over the internet and have them arrive in a timely or economical fashion.

We discussed that it is possible to harvest your own rennet, and I forwarded him a link to another obsessed cheesemaker, David B. Fankhauser. Dr. Fankhauser shows his attempt to create his own rennet from the stomach of a suckling kid (the goat kind). I thought if Jon were really desperate, this was something that he could try. If seeing where your food comes from does not disturb you, check it out here.

Jon replied and told me he had coincidentally just seen that very page in a recent posting to the blog Serious Eats. In this entry Jake Lahne discusses the use of the Cardoon Thistle as a cheesemaking coagulant.

I have read in American Farmstead Cheese that thistle was used in historic cheesemaking when animal rennet was not available or not desired. Jewish cheesemakers used thistle to create a kosher cheese (avoiding mixing meat and milk). Some cheeses are still made today using this process: Torta la Serena, Torta del Casar, and Serra da Estrela are examples.

I am very curious about trying to use Cardoon as a coagulant. My favorite seed company carries it, so I will try planting some this year. Stay tuned for results this summer/fall.
Posted by sputicus at 10:01 PM 5 comments: 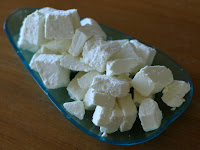 For my first live demonstration I chose to make Feta cheese since it was relatively easy and a perfect rennet coagulated cheese for the beginning cheesemaker to tackle. I wanted to discuss the results from using live starter culture instead of direct acidification, show what a clean break looks like, and walk through the process of cutting and cooking curds. I felt the demonstration went really well, and strangely no one complained about my long winded food science talk of enzymes and proteins. Blogger "Food and Books and Stuff" posted a lovely review on her blog.

I adapted a Feta recipe I received in the class "A Practical Introduction to Cheesemaking" which I took at Oregon State University. I added an introduction that covered home cheesemaking equipment and sanitation, edited it until it fit on the front and back of a single sheet of paper, and used the results as a handout. You can download it from the Joy of Home Cheesemaking site for your own first attempt at rennet coagulated cheese.

Due to the leftovers from the class and the trial makes I did in preparation, my family has a lot of Feta to consume. Weekends are my turn to make dinner, so I am making Spanakopita.
Posted by sputicus at 3:06 PM 1 comment:

The owners of The Homebrew Exchange let me know a little while back that they were having an open house today, and the thought never occurred to me that it would be worth re-posting the invite. Talk about late notice, I apologize.

Anyway, if you see this post today, and happen to be in the neighborhood, drop in and say hi. I will be there with some sample feta cheese that I made for my demonstration next Wednesday. The owners of The Homebrew Exchange are super nice and they are showing a real commitment to carrying cheesemaking supplies. I was really excited to have another place in town to send people who need supplies.

The Homebrew Exchange is located at 1907 N Kilpatrick St, Portland, OR 97217, and the open house starts at 4 p.m. Here is a direct link to the announcement on their web site.
Posted by sputicus at 2:25 PM No comments:

Portland has a great food community, including enough cheese enthusiasts to warrant a loosely formed organization of home cheesemakers called the DIY Cheesemakers. This group has been meeting at a great local cheese shop called Foster and Dobbs Authentic Foods.

I attended my first meeting last November and met Gayle Starbuck, who led a class on making fresh cheeses with direct set cultures. She and I talked after the class and I agreed to help set up an email list to help communicate between the meeting participants. That list now lives as a Google group, which can be found at diycheese.org.

I also talked to Luan Schooler after the same DIY meeting. Luan is one of the owners of Foster and Dobbs, and from what I can tell she started hosting the DIY meetings in 2008. I offered to do a cheesemaking demonstration. After an exchange of emails, I am now demonstrating making Feta on January 20th, 2010. I am very excited.

This weekend I have plans to visit a local goat farm to acquire some fresh raw milk and do a trial cheesemaking run at home. If the results are good, they will show up at the meeting on the 20th. I am also going to do a practice run with store bought cow milk to hopefully show the difference between the two milk sources. The demo will done with store bought milk, as that is what most people will be using in their own kitchens.

So if you are in the Portland area, come join the fun. See the details at diycheese.org.
Posted by sputicus at 4:16 PM No comments: