A Practical Introduction to Cheesemaking at Oregon State University 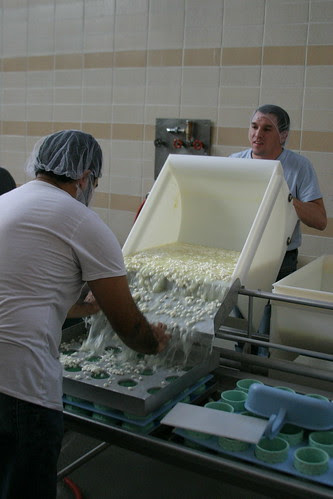 This week I took part in an OSU extension class called "Practical Introduction to Cheesemaking" (See flyer here). The class was led by Dr. Lisbeth Goddik of OSU with Marc Bates, former Creamery Operator and Manager for Washington State University Creamery. The class was a basic introduction to cheesemaking, aimed at the entrepreneur interested in starting a commercial artisan cheese plant. Despite this, the class was encouraged to ask questions as technical or advanced as they wanted, and the instructors were very happy to scale down the topics to the home cheesemaker.

We practiced making cheese in the OSU Cheese Pilot Plant. This was very exciting, as we were working with commercial scale equipment. See the flicker stream linked in the photo above (and more photos will be coming soon).

I learned so many interesting tidbits of cheesemaking knowledge that I thought I would use this blog entry as a notepad to jot them down for my own personal reference and to share with the web world. Check back and watch the list below expand as I get the time to add more entries. If you were in the class feel free to add your own in the comments section, and I can add them to this list.